Skip to Main Content
It looks like you're using Internet Explorer 11 or older. This website works best with modern browsers such as the latest versions of Chrome, Firefox, Safari, and Edge. If you continue with this browser, you may see unexpected results.

The Central Library and the Julia Ideson Building will be closed on September 22, 2022 for a city event. Find your nearest location. 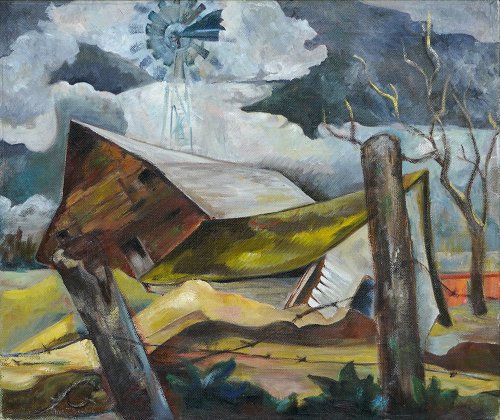 Opening to the public on August 27, 2022, at the historic Julia Ideson Building, is Texas Modernism(s): Houston/ Dallas in the 1930s. In Houston and Dallas, Modernism became the central focus for two small groups of local artists from 1926 – 1942. Made up of mostly youngsters, along with their forward-looking mentors, the Cherry-McNeill Group in Houston was influenced by European movements, while the Dallas Nine (and adjacent artists) up north took inspiration from their immediate surroundings and promoted Regionalism.

By showing the work of the two groups side by side, this exhibition intends to explore the looks and philosophical underpinnings of two seminal aspects of Texas art history. The Cherry-McNeill Group and the Dallas Nine strongly influenced later developments in their two respective cities, as well as the state in general. At the same time, the exhibition will demonstrate that Modernism, when it came to America, was not limited exclusively to the art centers of the East Coast.

This exhibit is free and open to the public.
Dates are subject to change.

Enter your e-mail address to receive notifications of new posts by e-mail.